UNBELIEVABLY THE ORANGE FACED PIECE OF TOAST,  GOES FULL ON NIXON TO EXPLAIN WHAT HIS VETERAN POLICIES WILL BE ONCE ELECTED

And reads the entire speech off of a Teleprompter, which was possibly written by Tricky Dick's former speechwriter

Just when you thought he couldn’t get lower, Donald Trump does it again. So today’s debacle was his big Veteran’s speech. And we discovered that now he’s decided that he is “The Law and Order Candidate”… “Believe me!” I guess that sounds better then I’m gonna build a wall and one sect of society is basically all rapists and murderers. I guess that’s a step in the right direction? Maybe today was the even day, cause he was reading off of the Teleprompter, and tomorrow I guess will be the odd day, and we’ll get the crazed lunatic nut job going free range without notes, or maybe we will see that candidate later tonight. Because that’s what he seems to do… and his followers or at least the ones in the Republican party that have no choice but to side with him, cause heaven forbid Hillary gets in, I mean she’s worse then him right? So he came out and read a speech off of a Teleprompter, his eyes looking like someone had soaked them in Visine, and at any second it seemed like either he was gonna cry or his eye balls were gonna slip out of his face.

And what we got, sounded like something out of the mouth of Richard Nixon, former President of these United States. And as this article that I found later in the afternoon explains, there was a reason for the sound-a-like:


"One of Trump’s longest-serving political advisers was a Nixon campaign strategist, which may account for the verbal similarities. Roger Stone is not currently working for the Trump campaign, but on Monday, he posted a tongue-in-cheek image on Twitter following Trump’s speech." 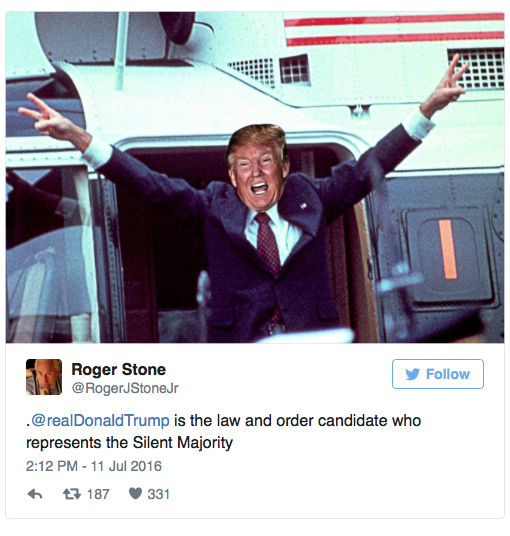 Of course if one would look at Roger Stone’s  tweet, one might presume he wasn’t a fan of Nixon… I mean, I look at it and I feel like I’m gonna throw up a little.
Honestly I sat back listening to Trump, first he gave us his ‘10 point plan’ to fix The Veteran’s situation, and we got his attack against Hillary, throwing all the usual talking points against her, and we got Nixon and his law & Order spiel, the one that helped elect him in1968. And then when he was done, he quickly left the stage, probably cause he needed to flush his eyes out of whatever ointment they had put in them… I understand the place where he was speaking was very much a Pro Republican event, so hearing the cheers after each one of his proposals was honestly laughable. As long as he says the right words, they cheer him, believing that look he has turned the corner, that is until the next time he’s off script.
Of course, I wish whomever wrote the speech had been paying attention to Washington, cause just this past week the Senate failed to pass the latest Veteran's bill. So nothing was enacted to help them, as Mitch McConnell said, "we won't vote in anything the would add to the deficit". Unless Donald figures the Democrats are gonna take over the House and Senate and will deal with Veteran's cause they would whomever is the President. Or he thinks he can just tell the Republicans to do his bidding, nothing he suggested today would get passed by this current Congress.
But Nixon, is an interesting choice for him to pick, the candidate with 'over 4000 law suits against him' as reported by USA Today, and the one who calls others "crooked" chooses the most corrupt President this nation has ever seen as a person to copy his notes from. Guess it takes one to know one.

Here's the link to that story.
http://www.usatoday.com/story/news/politics/onpolitics/2016/07/07/new-usa-today-interactive-database-shows-trump-lawsuits-surpass-4000/86809010/

So there you have it another day of the toast's campaign and another day to make you sit back and go, what the heck is he actually trying to pitch. Is he a racist who wants to build a wall or is he the Law and Order candidate? The person who claims everyone is lying, seems to change his positions daily, is he telling us the truth about his Nixon proposals? The person who claims everyone else is crooked is the one with all the lawsuits against him. The person who says his favorite book is the bible, seems never to have read it. The person who wants to be Commander-In-Chief, doesn't seem to know the constitution. Well, sadly if somehow he actually gets elected, the person who says he will "make America great again" might wind up in a Prison cell… I mean one of all those law suits might do him in. Sorry Donald, it seems your the one with legal issues, not Hillary… Maybe you should learn Nixon's mantra for when you are testifying at one of your trials:  "I am not a crook!"