MISTER ROMNEY YOU'VE BEEN FOUND OUT
HE'S PROF HAROLD HILL OF 'MUSIC MAN' FAME
Unfortunately he's hasn't gotten his foot stuck in the door yet!  But if he's elected, we will.  But me think Ms. Rachel Maddow has delivered the knock-out punch. In a scolding Pulitzer's worthy investigative report. Ms. Maddow has smoked the golden goose. The flimflam artist has been uncovered. His cloak of description has been torn asunder.
From his lies about his home in Mass. To his current smoke-screen about his taxes Rachel showed in beautiful chronological and with video and documented proof showcased how Mr. Romney had by-passed the laws. Lied under oath about his taxes (in 2002) and sidestepped the questions for literally decades. Fudging facts to his advantage. Literally backdating and tax forms for political purposes.
But watching him evade questions in his European picture tour the similarities between him and the brilliant Robert Preston's Harold Hill smacked me straight in the face.  Of course, big difference here, the great Mr. Preston had charisma to spear, something that Mitt has none of.
It's quite amazing how seemingly without a hitch, on any subject, his speeches message changes from one audience to the next.  Somehow successfully evading any real answers to any and all questions.  The problem with traveling salesmen, and flimflam man is that once the mask has been lifted, what is revealed can be quite scary.
Of note: I originally wrote this commentary on August 2, 2012
Just one man’s opinion
© Neil Feigeles, Neilizms, Tuesday, September 18, 2012
Posted by Neil Feigeles at 3:23 PM No comments:

QUOTES TO LOSE CAMPAIGN AN ELECTION:

#20   SAYING THAT OUR PRESIDENT HAS LIED ON PAST DEBATES WITHOUT FACTUAL TRUTHS, DOES THIS MAN HAVE NO DIGNITY?

“I think the challenge that I’ll have in the debate is that the president tends to, how shall I say it, to say things that aren’t true,” Romney said. “I’ve looked at prior debates. And in that kind of case, it’s difficult to say, ‘Well, am I going to spend my time correcting things that aren’t quite accurate? Or am I going to spend my time talking about the things I want to talk about?”

Mitt, Mr. Romney you have officially become a PRICK!!! How dare you, to imply that our President has lied, will lie on the upcoming debate. No proof, no facts, no nothing, lets just throw out a bogus claim, against our President.
Of course listening to Mitt, one honestly doesn't know what to believe when he speaks. Perhaps, he's letting us know that he's gonna lie his ass off during the debates, so if I warn everyone about the 'other' candidate they'll miss all of my verbal gaffs. How not to earn the White House.
Maybe he is seeking help. Look at him when he speaks, watch is body language, he looks kind of constipated. and not in a good way.
To read more about this important story, please check out the link below:
Romney on Debates: Obama Will ‘Say Things That Aren’t True’
http://abcnews.go.com/blogs/politics/2012/09/exclusive-romney-on-debates-obama-will-say-things-that-arent-true/
Just one man’s opinion
© Neil Feigeles, Neilizms, Monday, September 17, 2012
Posted by Neil Feigeles at 2:49 PM No comments:

QUOTES TO LIVE FOR:

#7   I GUESS THIS IS WHAT YOU CALL A DOUBLE NEGATIVE

On Saturday, former presidential candidate Rick Santorum put both feet into his big mouth when he attacked the media and "smart people" both at the same time in a speech to the Values Voter Summit.

"We will never have the media on our side, ever, in this country," Santorum, a former Pennsylvania senator, told the audience at the Omni Shoreham hotel. "We will never have the elite, smart people on our side."
The media "doesn't like the other side," Santorum said. "And not necessarily, I would argue, because they agree with them, but because they can influence the country.

Simply astonishing, does he realize how dumb he sounds.  I mean, logically woldn't you want the smart people on your side. Meaning, you are correct in your theories and your ideas. I guess the world is flat.

Posted by Neil Feigeles at 4:40 PM No comments:

HERE'S MY FIRST POLITICAL POSTER
I THINK IT SAYS IT ALL
Sorry about the absence here. Been having trouble logging into the site, and well... blah, blah, blah, blah, blah, blah. No excuses, but sorry is all.  Lots of stuff has been happening, hopefully I'll be able to add a few new articles before the big Election event coming up in November...
Now to todays's entry... I've illustrated a portrait of our President, and have decided to use it in a poster design... here is my first attempt. 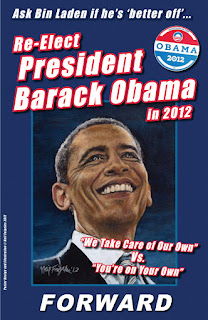 Hope you like the art and the poster.  Let me know.  Please forward and share the poster. If one more person votes for President Obama because of my poster, then my job is done.