SO ITS NOT A CORINATION,
ITS A RACE
Here's my choice for the nominee 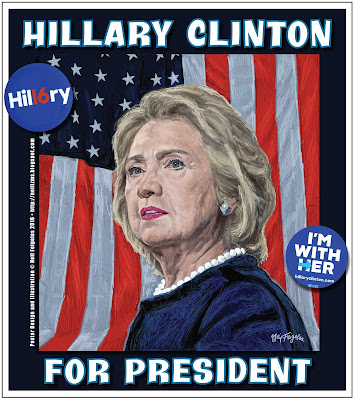 You guessed it, Hillary Rodham Clinton, former First Lady of the United States, former Secretary of State. A champion for woman's rights and children welfare. What more do you want. And she wears a mean pants suit.
She's an experienced leader, a person who could get things done, and has.
Eight years ago, I voted for her in the New York State Democratic Primary, which by the way she won. I also voted for her twice for New York State Senator. And I should admit, I kind of was a fan of her husbands too, and yes, he got my vote both times, and would again if he could run.
I like her political positions, I like the fact that she has learned and grown and reconfigured her positions, things change, life changes, experiences showcase the good, the bad, and the Ugly. To argue that she's only recently believed Gay marriage was a good thing is honestly asinine. Who among us though a decade ago, that that was even a possibility.
And honestly too many of Bernie Sanders positions and arguments are simply pipe dreams. If you think we've been thru a nightmare now with gridlock in Washington, could you imagine if we elect him and his wants. I'm sorry, I just can't see America voting in, a Jewish Socialist from New York City. Just saying, of course, after the historic victory by our current President, proved much of the world wrong on that one. So perhaps I'm just a jaded American. That said, I would vote for Bernie, if he does win the nomination. I did with Obama, I was very glad he did. And of course he showcased why he was the right choice, by making Hillary his Secretary of State. Proving politics isn't his game, accomplishment is. And as Secretary of State, me thinks we've been showcased why she is ready for the job as Commander-in-Chief.
Historically speaking, she's basically been groomed for the job, and is possibly the most qualified candidate ever for it… Just ask her husband. Shes good enough for him, thats all I need.
Just one man’s opinion
© Neil Feigeles, Neilizms, Thurs. Jan 21, 2016
Posted by Neil Feigeles at 12:32 PM No comments:

“THE STATE OF OUR UNION” IS STRONG
Then why can’t the Republicans see it?

Talk about devided government. Our President stands in front of the American people and spends hours telling it like it is. Good, bad, and ugly… oh sorry, that was how they on the other side of the aisle treated our Commander-in-Chief. Ugly… Nothing he said, the rate of unemployment, the success of Obamacare, his recent achievements. Even his killing of Bin Laden… nothing could get them to at least acknowledge his accomplishments. The eye opener for me, was seeing them practically yawn at his announcement of his goal to rid our world of Cancer.
Not one Republican, as far as I could see, cracked a smile, not one stood up, nothing. No applauds… Me thinks the only thing that would make these ‘patriots’ smile was if our President resigned and appointed ‘W’ King of the World.
Whenever he’s questioned about how he couldn’t warm up to Congress, he always say’s “thats one of his big regrets”. Sorry Mister President, this one I can’t agree with you. This ‘unfriendliness’ has nothing to do with you. It has everything to do with the prejudice against you. If not your color, then at least your politics. Remember for a while when they tried to take credit for Bin Laden’s death…
A few months back as the War Mongers scream blood murder when you ‘forced your will’ on the world and forced them against their wills to your Iranian Nuclear agreement. How many people said they knew best. How weak was how President. You can never believe a word they say.
Well today the world applauded the news that Iran was releasing hostages. A trade of some kind was happening. They were freeing hostages that the right had complained weren’t included in the original deal.
Remember as they screamed bloody murder? I do, as if it was yesterday. They whined that without the freeing of the hostage, that Iran was pulling the wool over our President’s eyes. As usual he was giving away the world. As if they were making him the fool.
Well, all the news isn’t available yet, but at least today it seems diplomacy has worked again. Instead of a possible Nuclear war in the foreseeable future, thanks to our President’s initiative, we now have gotten to the point that Iran has done everything they agreed to do. And even before they got their sanctions removed, which wasn’t a part of the deal (as far as we know now), they are releasing the hostages. A win win for diplomacy. A lose lose for the haters of the deal. ou know the ones who have been wrong on every major policy issue for years.
As as expected the right can’t budge an inch. During the most recent Republican debate, this is what Governor Chris Christie said, when describing our President. “petulant child.”
And after the release of the Iranian hostages today:
The prisoners “should have been released without condition, but you know, the Iranians have treated this president with disrespect for years and he continues to take it.”
Really, well, if anyone knows about “Disrespecting” our President…  what, have the Republican’s been hospitable? They’ve been trying to remove any memory of his legacy, before he even got into office… just saying.
Just one man’s opinion
© Neil Feigeles, Neilizms, Sat. Jan 16, 2016
Posted by Neil Feigeles at 5:17 PM No comments:

THE PRESIDENT CRIES…
While Republicans do nothing but whine
It simply boggles my mind, today our President finally did as much as he could with Executive powers to try to alter the trajectory of murder and harm that gun violence in our nation is causing. And sadly as opposed to the BS thrown at us by the NRA and its paid off power players, guns weren't taken away for law abiding Americans in his actions, as supposedly is the Democrats aim. Which of course is nonsense spun by those who seemingly have no brain.
And what do the talking heads on the other side say… its an act. That his tears are false. That its all a political game. "Is that all there is!" Really! Calling our President a cry baby, cause he feels emotion discussing  the blood spilled over one dead baby after the next. The thousands killed every year.
Its bad enough that they try to stop him at every opportunity. That they refuse to vote to authorize him to act militarily against ISIL and then bitch to high heaven what ever he deems necessary. Of course, without offering or suggestion any ideas that are different then Obama's. Or worse, offering all the same old policies that failed miserably under George W.
Seemingly all the President has really done is rewritten the language in the laws and asked the Congress for additional funds for those changes. Thats it. Nothing major, cause sadly it seems, that the Congress is the place to fix the problem. The President can only suggest and tweak.
As usual in modern politics, especially since Obama became President, the opposing talking heads already had attacked our President even before the actions have been announced. So when they're announced, the spin against any moves are already turned into nightmares scenarios as opposed to what they really are, little steps in the right direction.
And I'd rather have a politician that has feelings then have ones have none… any day.
Just one man’s opinion
© Neil Feigeles, Neilizms, Tues. Jan 5, 2016
Posted by Neil Feigeles at 3:16 PM No comments: