POLITICAL CARTOONS
DO THEY EVER GO TOO FAR, WELL IF THEY HAVEN’T, THEY'RE GETTING REAL CLOSE

In the past, political/editorial cartoons have caused international issues over political or religious beliefs. Usually overseas. For the most part I have kept quiet on them, if or when they bothered me. Once in a while I’d get a good laugh. There are times I’m pretty surprised or shocked at the nerve of some cartoonists and their editors for allowing the offensive cartoons to be published in the first place. What constitutes going too far. Usually if there’s an uproar, the newspaper claims first amendment rights. Well what if the artist does goes too far? What can you do besides bitch and complain. Write a note to the editor or decide to stop buying the paper itself. Usually I just forget about it and worry about other things instead.
But inside Tuesday’s edition of the New York Post [published on December 27, 2011], when I opened it to read the Page Six editorial cartoon, I immediately cringed and wanted to scream "How could they.” I hoped what I saw, wasn’t what the artist or his editor had intended. Maybe I was putting my own agenda into the caricature. While the text in the image didn’t upset me [the usual republican talking points], I just couldn’t get over what I saw printed.
You see, what I saw was [knocked out in white/almost in silhouette] an erect penis. And surrounding the stalk, were a huge pairs of balls [instead of ears]. I actually took a few double takes before I realized that the caricature was an hysterical interpretation of our President. thats right. Now I saw it, now I get the artist. It's right in right of my eyes, President Obama’s head on top of his neck. But the more I looked the more I felt that my first impressions were correct. My first thoughts were anger. Then I tried to compose myself. Perhaps I was mistaken, perhaps I was just putting my agitation at all the other racist images that have prospered since then, Senator Obama announced his first run for the White House.
I’m sorry, but for some reason this time I feel the cartoonist and his editor have gone too far. It’s bad enough when a cartoonist interprets any black man as an ape, but a DIck Head. So what could I do. Who could I complain to. Then it hit me, my blog. At least I can complain inform others on the internet. Perhaps maybe, someone will see it. A groundswell will erupt against the New York Post.Time to write another ‘Neilizm’.  So I started researching, looking for images of President Obama. I went on Google, looked under ‘Racists cartoons of President Obama and the First Lady’ and found tons. And the more I researched, the more shocked I was at the epidemic of racist material out there.
Below are some of the worst 'editorial' cartoons that I could find. If you touch them they enlarge [just like his head]. None are credited [sorry], except for The New York Post cartoon [on #2] and all are used without permission. 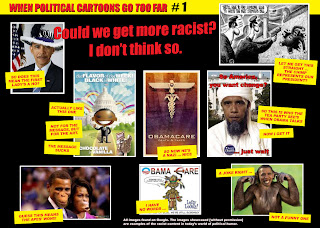 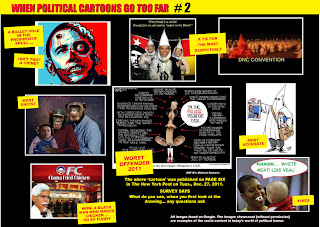 You can also go directly to the source, below you will find the link to see a much
larger version of the cartoon:
http://news.investors.com/editorialcartoons/Cartoon.aspx?id=595721