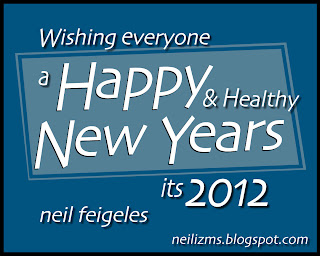 PHEW, WE MADE IT, IT'S 2012
[WAS WORRIED THERE FOR A WHILE]
THINKING POSITIVE THOUGHTS WITH MY WISHES FOR THE NEW YEAR

Hope everyone's 2011 ended better then it began. And that the new years brings great joy, love and happiness to you and all your loved ones. In honor of the new year, I thought it would be only fitting that I'd create my own annual lists. Showcasing my favorites or least favorite things of the past years, predictions for the next, and so forth. So without any further delays, heres my list for the new year. Let me know if you agree or disagree. Or think I'm a little batty. Of not these are in no particular order.
MY TOP 10  HOPES FOR 2012
10   THE AVENGERS film is as good as I've been fantasizing since I was five years old.
9   THE DARK KNIGHT RISES is the best film of the trilogy.
8   DEXTER, THE GOOD WIFE, HOMELAND, TRUE BLOOD & GLEE return, and are still simply great television.
7   RISE OF THE PLANET OF THE APES gets a ton of nominations including best picture and Andy Serkis for best supporting actor, or at least a special award for his motion capture performance. Simply a great flick.
6   the NEW YORK GIANTS go all the way [somehow], THE NEW YORK KNICKS and RANGERS win their respective championships, then maybe The YANKEES ... Remember 1969. I'm not delusional, just a day-dreamer.
5   RIDLEY SCOTT'S PROMETHEUS is truly the prequel to his classic 'Alien' and at least as good.
4   The UNITED STATES refrains from any military action and spends the funds on fixing our infrastructure
3   CONGRESS gets kicked to the curb and things really begin to peculate with our economics
2   of course WORLD PEACE
1   PRESIDENT OBAMA wins in a landslide
Here's hoping some of my wishes come true in the new year.
Just one man’s opinion
© Neil Feigeles, Neilizms, Sun., Jan.,1, 2012

Posted by Neil Feigeles at 3:28 PM