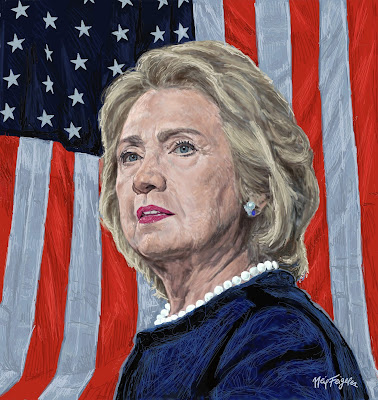 FIRST WOMAN PRESIDENT OR MISSED IT BY THIS MUCH?
After a half of century of public service is this what it comes down to?
Presidential Candidate Hillary Rodham Clinton, that's what I called my latest 'sketch'. Believe it or not, this is my first ever attempt at capturing the essence of possibly our next President. I've personally always admired her, but I've never tried to capture her likeness in art. Hopefully my illustration gives her the gravitas that I think she deserves. And as a portrait of a possible President, I think it feels just about right, but I'm just the artist, not the patron.
Sadly the politics of the moment, seems to be having an effect on her popularity, its amazing how much you're loved till you start to run for political office.
Forgot all of her qualifications, all of her experience. Her work for woman and children around the world. Everything that she's ever done, which for the most part is all we heard before this current political cycle. That was until, Benghazi and the sharks smelled blood. And the attacks, that what she really did in her 'posts',was simply holding office while waiting for her coronation as Queen of the Universe.
And with the popularity of FOX Faux News, and after The Citizens United Ruling, I guess if you throw a billon dollars worth of negatives at anyone, even, dear I say it God, he/she wouldn't be so respected and loved with the amount of attacks this woman has gotten, on a daily basis.
Remember until Bernie Sanders took fire, she was the only candidate, the only, and they attacked…  and they had two years to make her look bad, and boy are they trying, and sadly even succeeding probably better then they had even hoped.
Before she ran, all we seem to get was attacks towards her, why isn't she running, why won't she say anything… all talk, all filling dead air. Then when she announced we got what are your policies?, we want everything… now. And through out we've gotten the Benghazi-gate and Email-gate. Both conspiracies are mostly smoke and mirrors. But with the media trying so desperately to make something out of the 'emails' and of course, now that a democrat, Bernie Sanders is actually gaining traction [because he's obviously captured the anger of the people who have been stuck in this meandering political game that our country is currently in.] Scarily what we are being showcased in the media and the news is the constant attack of the common man, and there is no better voice then Bernie Sanders to say what they want to hear. The perfect outsider, and possibly the perfect candidate for 2016. And probably the main reason I think Donald Trump has gained favor at least in the polls, is people are simply fed up with the B.S. specifically that the Republican Party has thrown at us for over decade. The worst part of all this, is that is seems The Republicans have decided to yet again double-down on the failed policies.
It's honestly scary if you believe in democracy. And sadly, it feels like I'm watching a replay of V for Vendetta and A Face in The Crowd in a loop every time of The Republican's open their traps.
So far, everyone of her policies seem to be right on target. She's saying the right things, her campaign strategy seems to be on course. And now she's responding to the attacks with intelligent well thought out answers, that actually shuts down the lies as what they are…total nonsense. And amazingly, I've yet to hear her make one verbal mistake, in fact, so far she's been practically the perfect candidate on the stomp. That said, sadly it seems to be that the media is really trying to push the negatives about Hillary, any semblance of a problem, gets drummed into a major problem, simply trying to come up with another news exclusive, even if its nothing it get shouted as this days bombshell. But even with all the attacks and with an honest to goodness real opponent to battle for the nomination, she still seems to be right on course for the nomination. And I for one can not wait for the debates. It could be another Clinton Vs. Obama battle to the finish.
So, will the stars align this time for her or is Bernie this election campaign's version of Obama? Or will this time, she be able to win the big prize.
Win or lose, this great American has solidified her place in the history books. Personally I hope, her story has an even more historic chapter to write. I can only imagine what she could do leading our nation forward. I also understand, if she wins, the attacks on her could actually get worse and we could be in for another eight years of Republican blockage. But as we've seen with President Obama, a strong Democratic President can accomplish great things when given their chance.
Just one man’s opinion
© Neil Feigeles, Neilizms, Tues., August 18, 2015
Posted by Neil Feigeles at 5:20 PM