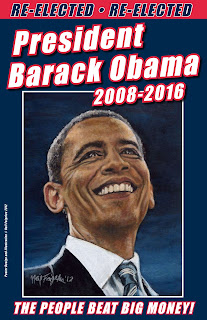 BIG MONEY LOSES BIG TIME, AS THE AMERICAN PEOPLE HAVE THEIR SAY
PRESIDENT BARACK OBAMA WINS RE-ELECTION
Finally after way too long, the people have spoken. The President was re-elected easily. Giving everyone a chance to see how politics should be done. Beating greats odds, and a candidate that seemed to changed positions by the minute, plus millions of dollars of hate speak. The American people  stood up against all the lies and made me proud to be an American. A country which was born of our quest for freedom battered back against the people who are trying to rid us of as much freedom as possible.
The republican party which supposedly strives for freedom, spent millions trying to turn our now re-elected President into an outsider, an alien, or worse.  Trying to push their religious beliefs on all of us, regardless of our own.  Pushing their mantra that if you're not one of us, obviously you must be against us. Making racism seem like part of their National agenda.
But, good won the day and amazingly it wasn't even close.  Even with Florida still not counted fully, President Obama trounced Mitt Romney and Paul Ryan even more then even I hoped for.  And whats better, because of his over 50% win of the popular vote, twice. More then even the ever popular President Bill Clinton.
So now we get four more years of President Obama and Vice President Biden. We get to watch as both parties explain why they won or lost. Listening to see who actually got what just occurred or who still lives in their own world. We get to see, if our elected officals finally act like adults and get the job done.
Four years a go, our President was elected to fix what President Bush 2 left us in. And thankfully he has been given another four to finish the job. Leaving us a much better and stronger nation. I have high hopes that he is more then up to the job, and am even more thankful that unlike when Vice President Gore lost the chance to continue President Clinton's agenda, President Obama will be able to.
I have never felt more excited about whats ahead for our country. Good won out. Hatred lost. Racism was smacked back into wherever it came from. We have not a good man in the White House, but a great man. And now we get to watch as he gets to do his thing. And boy is it gonna be fun. Yes we can, Yes we can. Yes we can.
Just one man's opinion
© Neil Feigeles, Neilizms, Wednesday November 7, 2012
Posted by Neil Feigeles at 7:53 PM