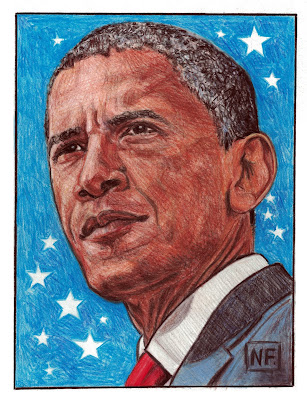 HISTORY IN OUR LIFETIME:
THE PRESIDENCY OF BARACK HUSSEIN OBAMA
Sometimes we don't see it.


Sometimes, greatness just happens and its not until years later its celebrated or turned into legend. Well, living in the age of President Barack Hussein Obama, is one of those times. And its amazing to watch as his story unfolds in front of our eyes. One can only wonder what he'll do in his remaining months in office. One day he was a little known Senator, the next he spoke at the Democratic Convention, the next he appeared on the Oprah Winfrey Show,  and then, he began a movement of Change and Hope, which eventually landed him in The White House, twice. And once in the White House, he has only showcased how right the American people were.
To be honest with you, I was not a fan at first. I've never been a fan of speech when it feels almost like a sermon.  My problems with him, were more about, the years of listening to others make those speeches, and then discovering half of them seemed to have skeletons in their closets  or worse. Which Caused me to instinctively mistrust those who spoke in such cadence. I also, was and am a fan of Hillary Clinton, so I regarded him as a threat to my fantasy of seeing her as our first woman President. Heck, honestly, I want to see if a woman could do a better job then the bozo's who've done it, hard to believe a woman could do worse.
That said, it didn't take me long to recognize there was something special about him. And before election day, I was a supporter and a fan. That is if you can be a fan of a politician? In any event, my admiration for his qualities, intelligence, graciousness, policies, family, everything, has only grown.
What gets me is, that compared to the other politicians out there, now and in years past, the man's in another Universe. He's heads above seemingly everyone. And as we've watched as his accomplishments, his achievements have accumulated, more and more, I'm finding it hard not stand and applaud, and shout out loud, bravo, after yet another brilliant speech.
And seemingly he's done everything with half the political world screaming racist comments, lying about everything, trying to stop him at every turn. Which makes what he's done even more amazing and astounding. When he says that Joe Biden is gonna lead the parade to end Cancer, for the first time in my life I actually believe its possible.


Well if there's a petition to add his bust to the fame Mount Rushmore I'm gonna be the first person to sign it.

Posted by Neil Feigeles at 1:52 PM